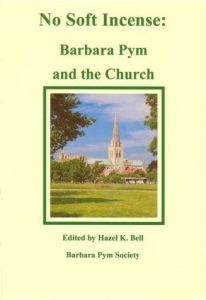 There are some seventy-five clergymen in the work of Barbara Pym, which averages out at 5.76 a novel. Quite what 0.76 of a clergyman might be like would, I think, have amused her. What could have marked the man down? Pomposity? Snobbery? Absence of humour? Or perhaps the simple thoughtlessness of having a wife. ‘Just imagine, a married curate,’ says Harriet ‘in disgust’ in Some Tame Gazelle. A young married clergyman simply isn’t playing fair.The churches themselves are sturdy Victorian buildings, Anglo-Catholic in temperament, filled with the lingering smell of incense and lit by low-wattage lamps and a few guttering candles. They offer the timeless reassurance of daily Holy Communion, Sung Eucharist on Sundays, Confession and the Reservation of the Blessed Sacrament. The clergy who officiate might be kindly, hapless, holy fools, or vain beyond measure; but they are invariably ‘at ease with ladies.’ It is how these women deal with the uniquely clerical mixture of pride and incompetence that makes up much of Pym’s humour…Pym understands the way in which many clergymen convey a lifestyle so hectic that they cannot quite cope and need help: serious, regular, help, preferably from adoring and ‘excellent’ women who will be there to cook, type, arrange flowers, wash albs, and wrap up presents at Christmas. They need ladies to see to their cassocks, mend their socks, cook boiled chicken, and type up their sermons for collection in some august future volume…In any other author such ironic observational humour could be crude and unforgiving, but Barbara Pym’s writing contains both gentleness and a startling lack of ego that both tempers and blesses the acuity of her observation. It celebrates all that is best of Christian wisdom and generosity: hopeful without being trite, loving without being naïve, comic without being cruel. It is both reassuring and realistic, borne of the knowledge of the need for simple pleasures, well-spaced treats, and the advantages of a generous heart.

—From the Foreword by James Runcie